You can reset your password or get your username by entering in your account email below. Once submitted check your email.

Thank you for becoming a VIIN Member

Return to Homepage
< SEE ALL NEWS

The CSIRO Australian Animal Health Laboratory (AAHL) is a high-containment facility designed for research into the most dangerous infectious agents in the world. AAHL plays a vital role in maintaining the health of Australia's animals, the international competitiveness of Australian agriculture and trade, the well-being of Australians and the quality of our environment.

Officially opened in 1985, AAHL was built to help protect Australia's multi-billion dollar livestock and aquaculture industries, and the general public, from emergency and zoonotic disease threats. In recent years, AAHL has become a leading ‘One Health’ laboratory due to extensive work conducted on zoonotic viruses – those that can pass from animals to humans. We work extensively on avian influenza and our scientists were instrumental in identifying and characterising Hendra and Nipah viruses and helped identity SARS originating from bats.

AAHL’s responsibilities as a National Facility to industry and government stakeholders can be summarised into three main areas:

AAHL is equipped with a large laboratory space at biosafety level (BSL)-3 and BSL-4. These facilities are accessible to Australian and international researchers for collaborative research. The BSL-4 zoonosis suite and bioimaging facility provides advanced technology and infrastructure for scientists undertaking research that requires a laboratory environment with the highest levels of biosafety. AAHL also features a comparative immunology laboratory for specialised immunology research at BSL-3 and BSL-4, including flow cytometry and cell sorting. 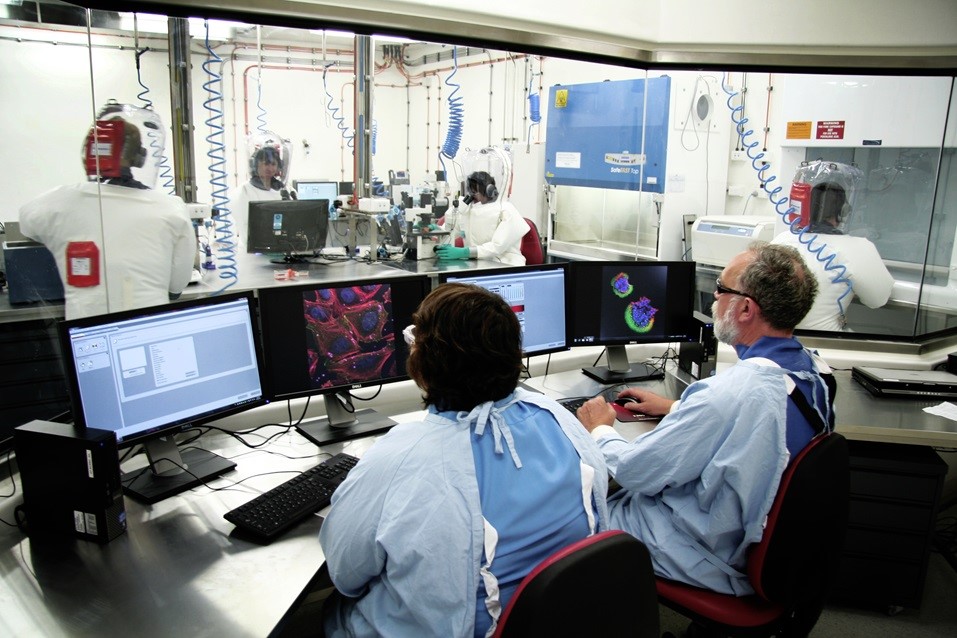 AAHL has a particularly rich history in the study of Hendra virus, a highly pathogenic RNA virus harboured by flying foxes. In 1994 AAHL's diagnostic team isolated and identified Hendra virus in what proved to be a new virus not previously reported anywhere else in the world. In recent years CSIRO played a key role in the development of a Hendra virus vaccine for horses. Following rigorous safety testing CSIRO, along with its partners launched the Equivac HeV vaccine in November 2012. The Equivac® HeV is a world-first commercial vaccine for a BSL-4 agent.

Many researchers based at AAHL are members of CSIRO Health and Biosecurity. Research topics are diverse and include the development of animal models for infectious diseases, immune pathways in bats, birds and insects that may convey disease resistance and host pathways exploited by pathogens for infection. Researchers at AAHL are also leaders in the use of gene editing techniques in the chicken and the development of vaccines against foot-and-mouth disease in cattle and sheep. We’re also developing biocontrol agents to reduce the impact of carp on Australian waterways.